Basic Supply and Demand graph – The cross point is where supply and demand are in balance, or equilibrium, based on price and quantity: 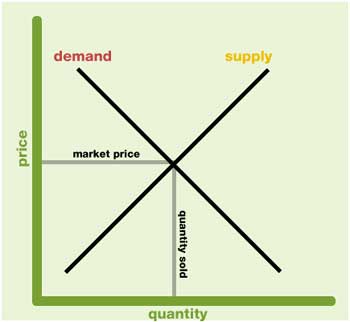 Basic Economics Overview - Supply & Demand, GDP and what is "The Fed"

Although there are many interpretations, economics is basically “the study of what constitutes rational human behavior in the endeavor to fulfill needs and wants.”

In business, companies follow economic news to make decisions on what products to make or discontinue, when to hire or lay off employees, build or sell a factory, spend more or less on advertising, etc.  Economics is a vastly huge subject and can go into a world of theories and complicated mathematical formulas.  We will, however, cover some of the basics.

The foundation of economics is Scarcity, which refers to the tension between our limited resources and our unlimited wants and needs.  Scarcity is the basic economic problem that arises because people have unlimited wants, but resources are limited.  Because of scarcity, various economic decisions must be made to allocate resources efficiently.  These decisions are made by giving up, or trading off, one want to satisfy another.  For an individual, resources include time, money and skill.  For a country, limited resources include national resources, capital, labor force, and technology.  The most common phrase that you have probably heard regarding economics is, “Supply and Demand.”

Demand is based on price.  The law of demand is basically; as price increases people are willing to supply more and demand less and vice versa when the price falls. The optimal is to have equilibrium where the price point for the quantity supplied is in balance with the quantity demanded.

The text of these materials, or any part thereof, may not be reproduced or transmitted in any form or by any means, electronic or mechanical, including photocopying, recording, storing in an informational retrieval system or otherwise, except for students own personal use. The author does specifically disclaim any responsibility for any liability, loss, or risk, personal or otherwise, which is incurred as a consequence, directly or indirectly, of the use and application of any of the contents of this course.
© 2009-2022 MasterClassManagement.com  All Rights Reserved
Page 86

Microeconomics focuses on supply and demand and other forces that determine the price levels seen in the economy.  It analyzes the market behavior of individual consumers and firms in an attempt to understand the decision-making process of firms and households.  It studies the shifts in demand based on income and other consumer factors.  An increase in income normally leads to an increase in the amount people are willing to pay for goods, thus are more prone to buy more luxury items.  There are also competing substitute products or services, which can lower the price of the original.

Macroeconomics focuses on the national economy as a whole and provides a basic knowledge of how things work in the business world, for example, the impacts of money supply, interest rates, unemployment, and government deficits.

The way we usually measure the size of an economy is by its Gross Domestic Product or GDP.  GDP is the value of all the goods and services produced within our borders in one year.  People who study macroeconomics would be able to interpret GDP figures and how they relate to our national economy.  Basically, GDP measures the size of the national economy by the total value of all goods and services produced within a nations border.  This is a key economic indicator for economic growth rate, which measures how much bigger or smaller an economy is one period, compared with the same period a year ago.  The formula used, and a brief explanations of the components measured in GDP, is:

The Federal Reserve, also known as “the Fed,” controls the U.S. money supply.  It is the central banking system of the United States.  It replaces old currency with new currency, guarantees bank deposits, and governs the banking system.  The Fed affects the economy by moving interest rates, selling and buying government securities, and talking about the economy (known as “moral suasion”).  The Fed manages two kinds of economic policy:

At the end of the day, the government wants a sound currency, low unemployment, and sustained economic growth.

Here are some more economic terms, and key economic indicators or trends, which are commonly used:

o        Bubble - When the price of an asset rises far higher than can be explained by fundamentals.

o        Business cycle - The business cycle has four stages including expansion, peak, recession, and recovery.  Lastly, recovery is what happens after security prices fall and eventually go back up.

o        Capitalism – Economic system based on private ownership, production, and distribution of goods.  It is based on “Free Enterprise,” which means the government should not interfere with the economy.  It’s about competition for profit.

o        Consumer Confidence – A psychological view from consumers on how they feel about the economy and their prospects in the current and future economy.

o        Depreciation - A fall in the value of an asset or a currency; the opposite of appreciation.

o        Depression – A bad, depressingly prolonged recession in economic activity. The textbook definition of a recession is two consecutive quarters of declining output.  A slump is where output falls by at least 10%; a depression is an even deeper and more prolonged slump.

o        Housing Starts – The start of construction on new homes is an economic indicator.  This is due to declining housing also means declining purchases that goes with a new home such as carpeting, appliances, drapes, electronic equipment, and labor such as painting and landscapers.  There is a domino effect when housing sales are slow for both new homes and existing homes.

o        Inflation - Rising prices, across the board.  Inflation basically means your dollar does not go as far as it used to as it erodes the purchasing power of a unit of currency.  It is usually expressed as an annual percentage rate of change.  If prices raise gradually, consumers can adjust.  However, rapid inflation can destabilize the economy.  Prices and inflation are key economic indicators.

o        Prime Rate – This is the rate on loans that a bank charges its most creditworthy corporate customers.  This is set by several major New York banks.  A sub-prime rate is for such companies or individuals that don't meet criteria of best market rates and have a history of deficient credit.  Interest rates are a key economic indicator.

o        Recession - A period of decline in a national economy over a period of time, usually two quarters of a financial year.  Spending and demand decrease, making the economic climate more difficult.

Bonds, which is basically an IOU that states that if an investor lends money to the government or a corporation now, then they will pay your money back at a stated time in the future while making small interest payments to you along the way.

Shares, which is part ownership of a company.

Derivatives, which are financial assets that “derive” their value from other assets that grant the owner a stake in an asset.  Such securities account for most of what is traded in the financial markets.

o        Stock Market – Basically, a high or raising stock market indicates a recovery is in progress and a failing market indicates recession.  The Dow Jones Industrial Average (DJIA) is based upon 30 extremely large blue chip U.S. corporations, such as GE, Microsoft, and Coca Cola, and is used as a key economic indicator.

o        Unemployment Rate - The number of people of working age without a job is usually expressed as the unemployment rate, which is a percentage of the workforce.  This is one of the key economic indicators.  This rate generally rises and falls in step with the business cycle.  The average goal is no lower than 4% and no higher than 8%.  If it goes too much lower, then inflation usually occurs.  If it goes too much higher, then the country could be headed towards a recession.

o        Venture Capital  (VC) – Private equity to help new companies grow.  A valuable alternative source of finance for entrepreneurs, who might otherwise have to rely on a loan from a risk averse bank manager.

o        Yield – The return on an investment expressed as a percentage of the cost of the investment.